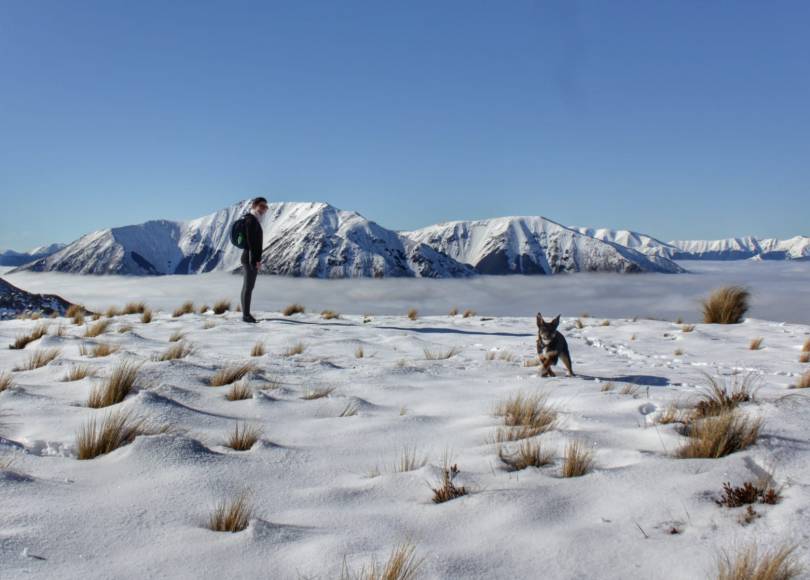 Craigieburn Forest Park is on route to the West Coat via Arthur’s Pass from Christchurch. While this entire route is fill with incredible views, walks, lakes and ski fields, it can be tough to choose which one to do if you have limited time!

While we were doing this walk in the first month of winter, I had to admit I wasn’t expecting snow to be on the side of the road on our way to Helicopter Hill! It was a small amount, but enough for families to have pulled over in the car to have a play – there were a few snowpeople around and people making the most of the slopes and sliding down on pieces of cardboard. They all looked like they were having an absolute blast!

Arriving at the carpark we got ourselves sorted and started walking. It was quite foggy/cloudy so we couldn’t really see much, but the walk was fairly easy through beech forest. Jack (the dog) was loving it, and it seemed like every person we passed had a dog with them too.

The walk eventually started to climb and keep climbing. I didn’t realise it at the time but we were walking up through the clouds. I didn’t really take much notice as I was too busy saying hi to all the dogs that were on the track with us – seriously, there were so many!

But then, there were traces of snow! Not lots, but enough to start getting me excited. There may have been (ok, there was), a few handfuls of snow thrown at each other on the walk up. A bit more snow started to appear but I didn’t really think too much of it. Until we got to the turnoff.

Amy’s Advice – go in winter time. I’ve seen some photos from the peak in summer time and even though it’s beautiful, there’s something about snow covered mountains that is just so much better!

Here was where we could follow a couple of separate tracks back down, or head up to the peak of Helicopter Hill. We were still in the cloud/fog so I couldn’t actually see the peak we were heading towards, but the sign said it was only 15 minutes to the top. So off we went.

It became warmer the higher we climbed until suddenly we emerged from the cloud + fog to find the most INCREDIBLE view. There were snow capped mountains all around us, surrounding us in every which direction. We had stunning blue sky. And it was warm. And there was SNOW!

I think the photos are all you need to see now:

I could imagine the view from the peak would be just as fabulous in summer, but being surrounded by snow and mountains coated in it was just absolutely spectacular. Highly, highly recommend!

When we started to make our way back down to the turnoff rather than going back down the way we came up, Paul + I took a different track down to bring us out a bit further on from the carpark, but the others promised they would drive the five minutes up the road to pick us up (they did!) The walk back down this way was fairly similar to the way up but it came out on to the four wheel drive track up to the skifield, so a bit more space to walk. And the timing was perfect as we met up with the others right as we got to the road end!

The photos were taken by Paul + I!

PS Sign up to receive these blogposts directly to your email – just pop your email address in the box on the right at the top of the page. And I love when awesome people leave me a comment – I like hearing what you have to say (as long as it’s kind!)

At Where To Walk you’ll find reviews of walks around New Zealand that I do, where I’ll review everything from a one hour walk to a multi-day walk with helpful information – how long did it take, what did I take with me, what amenities were available along the walk, what the views were like etc. I’ll post unedited, taken in the moment photos from the walk that will no doubt feature myself and my rotating bevy of walking buddies!

I live in New Zealand and am always on the lookout for new walks to do – so let me know if there’s a great one in your area I should do and review.